History of the museum:

The Polish Heritage Trust of New Zealand was established in the late 1990’s by Mr. John Roy-Wojciechowski , now former Honorary Consul to the Republic of Poland in New Zealand, to offer educational resources to the people of New Zealand about the country of his birth, Poland, its history, culture, arts and to share the stories of New Zealand’s and Poland relationship regarding the invitation to NZ of the ‘Children of Pahiatua’.

The museum opened its doors in July 2004.

Who is the museum for:

The PHTM is a museum for all New Zealander’s and overseas visitors, to share the stories of Poland and the Polish communities in NZ

There is no membership form to fill out or any applicable fee. You are welcome to join the PHTM email database to receive newsletters and updates on events happening at the museum. Please phone or send an email to phtmuseum@outlook.com

All past newsletters are online.

What are we about?:

PHTM collects, looks after and displays items related to Poland and Polish people in New Zealand. We thank all the donors from the Polish community and New Zealanders who have made this possible. Thank you also to donations that have been received from overseas.

The Museum is dedicated to Poland to increase awareness and knowledge of Poland’s history, achievements and contributions to the world and to remember the 733 children and 102 adults who arrived to NZ during WW2 in 1944

We are open to the public, both for individual visitors and group bookings, and is an excellent educational resource for schools. All groups will be warmly welcomed .

that East Auckland has to offer.

The objects for which the trust is established are:

[An extract from the Trust Deed]

Certificate of Incorporation under the Charitable Trusts Act 1957 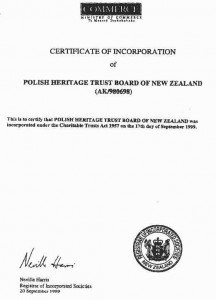 Extra notes re the following interview:

Early interview about the set up of the museum:

John Roy is a living example of endurance and survival.

The Honorary Polish Consul for New Zealand and retired businessman was born Jan Wojciechowski in Poland.

He was six when Russians Stalin invaded his homeland.

John and his parents, his brother and three sisters were farming land in the east of Poland at the time.

On February 10, 1940, the family and nearly 250,000 other people from eastern Poland were sent to slave labour camps in Siberia and the Arctic Circle.

But before the family left, John’s father was taken away. They later found out he had been shot.

The family spent 18 months in Siberia where they were put to work clearing the forest. In 1941 the family was allowed to leave the camp and was sent to Iran.

There John’s mother became ill with tuberculosis and died in hospital.

John and two of his sisters were shipped to New Zealand in 1944, leaving one sister behind in Iran and their brother in the air force.

They arrived in Wellington along with New Zealand soldiers returning from the Middle East and about 800 other refugee children.

“We were given ice cream and comics to read and all these things we’d never had,” Mr Roy says.

He clearly remembers reaching his new homeland. “My first impression of Wellington harbour was all the little houses on top of the hills with red roofs,” he says.

The children were sent to a Wairarapa camp, known as “Little Poland”.

They stayed there for two years. The young refugees were granted permanent residency and taught how to speak English. Mr Roy was then sent to boarding school at St Patrick’s College, in Silverstream.

He came to Howick 36 years ago. Mr Roy, who is married with six children, is now deeply involved in promoting Poland here. He formed the Polish Heritage Trust to teach New Zealanders about Polish history and wrote a book about his early life.

Mr. Roy recently set up a Polish museum on Elliot St. as part of his promotional work.

“It gives people of Polish origin a place to put their mementoes if they want to,” he says.

He is gathering items of interest, including books from a Polish soldier who fought at Monte Cassino.

He plans to give presentations about Polish history and literature to schools in the area, he says.

Museum a Tribute to Polish History

John Roy was only six when Stalin’s armies invaded his Polish homeland.

The boy and his family were sent to a Siberian labour camp where they lived in horrific conditions. One in 10 people died on the six-week train journey to the camp in 1940.

But in 1944, young John came to New Zealand along with 800 other Polish refugee children.

Today, Mr. Roy lives in Howick, where he has set up a museum to teach New Zealanders about Polish history.

The museum is filled with books, costumes and Polish relics. It is open to the public, both for individual visitors and group bookings, and is an excellent educational resource for schools. All groups will be warmly welcomed .

The location of the Polish Heritage Trust Museum is 125 Elliot Street Howick, opening hours are Tuesday to Friday 9 to 5 and Sundays 12 to 5.