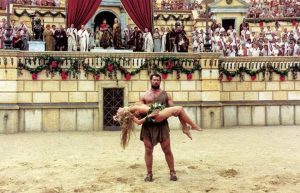 This masterpiece tells of a love that develops between a young Christian woman of royal descent, Ligia, and Marcus Vinicius, a Roman patrician. It takes place in Rome under the rule of Emperor Nero, around 64 AD amidst Christian persecutions.

Nero is portrayed as a sinister tyrant, personifying the decadence of the empire. Among the other real historical characters are the writers Petronius (d. 66), a rich aesthetician, and Seneca (d. 65), who opposes Nero.

This elaborate version of the Nobel Prize–winning novel written by Henryk Sienkiewicz, one of the first novels adapted for the screen, is said to be Poland’s biggest movie ever with a cast of thousands. It can also be seen as Sienkiewicz’s contribution to the struggle of the Polish people against repression, conveying a message of faith and hope.