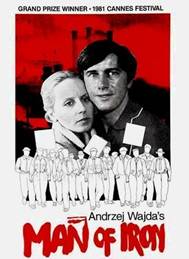 In 1980, during the strikes in Gdansk, Wajda visited the shipyard. A worker shouted to him “Now you must make a film about our story – ‘Man of Iron.’

The workers thus directly commissioned Wajda’s second film. Its production, from beginning to end, was completed in nine months.

The story unfolds…In Warsaw in 1980, the Party sends Winkel, a weak, alcoholic TV hack, to Gdansk to dig up dirt on the shipyard strikers, particularly on Maciek Tomczyk, an articulate worker whose father was killed in the December 1970 protests. Posing as sympathetic, Winkel interviews people who know Tomczyk, including his detained wife, Agnieszka. Their narrations become flashbacks using actual news footage of 1968 and 1970 protests and of the later birth of free unions and Solidarity.